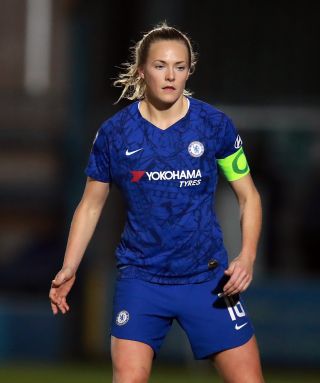 Chelsea captain Magdalena Eriksson believes the return of the Women’s Community Shield after a 12-year absence is a significant step forward for the women’s game.

Chelsea take on Manchester City in the fixture, which will be played before the men’s match at Wembley on Saturday.

It will be the first time the women’s event has taken place since 2008, when Macclesfield’s Moss Rose ground hosted Arsenal’s 1-0 win over Everton.

And Sweden international Eriksson said: “For us it’s a massive game – first of all the first chance of a trophy for us this season, there’s going to be loads of opportunities to win trophies this year and that’s what we want. So for us personally and for us as a team it’s a massive game, but also for women’s football that we’re playing a Community Shield again.

“We’re playing against Manchester City, who are a great team – sadly we’re playing without fans, that would have made the whole thing perfect.”

Chelsea qualified for the showpiece having being awarded the Women’s Super League title on a points-per-game basis after the league was called to a halt in May. Although City were one point ahead, the London club had played a game less.

City have since brought in the likes of United States World Cup winners Sam Mewis and Rose Lavelle, while Germany midfielder Melanie Leupolz and Canada international Jessie Fleming have joined Chelsea, and Eriksson believes the WSL is the league players around the world most want to experience.

The 26-year-old said: “England as a women’s football player is the country that you want to be in right now. It’s amazing, this is my third year and things are just happening every year.

“There’s great additions to the league, to everything, so I think it’s just really inspiring to be in this league at the moment and I’m hoping that it will shine on the pitch, the quality that we have in this country.”

The Community Shield will be the first time women’s domestic football has taken place since the League Cup final on February 29 because of the coronavirus pandemic.

“I think we’ve all been feeling like children again, finally getting the opportunity to play,” said Eriksson.

“I think we’ve been really enjoying this pre-season, we’ve had some great new signings coming in, the quality has been amazing and there’s just a really good group of girls that’s been working really hard together.