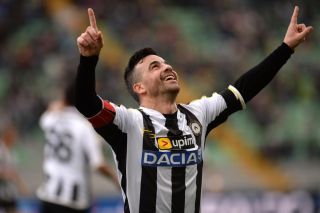 Palermo had become a top-flight casualty when they were beaten 3-0 by second-tier side Modena on Saturday, but there were no further shocks 24 hours later.

Stefano Poli's Lazio side were frustrated by their lower-league opponents in the first half, as they were unable to break the visitors down.

The second period was a different story, however, as Lazio's class eventually told, with Antonio Candreva opening the scoring a minute after the break.

A brace from Balde Diao Keita followed, either side of a goal from Stefan de Vrij - the defender's first since signing from Feyenoord.

In the final 10 minutes Marco Parolo, Dusan Basta and veteran striker Miroslav Klose all added to the scoreline as Lazio completed the rout.

Di Natale clinched his hat-trick in the first period in Udine, before adding another two goals in the final 15 minutes as the hosts comfortably got the better of their second-tier opposition.

Cesena's victory over Casertana was in stark contrast to that of their Serie A rivals, as Pierpaolo Bisoli's men squeezed past their Lega Pro-opponents 1-0, Guido Marilungo's goal allowing all around Stadio Dino Manuzzi to breathe a sigh of relief.

Genoa were involved in a similarly tight affair, as Mauricio Pinilla's 31st-minute penalty saw them advance at the expense of Serie B side Virtus Lanciano.

Verona saw off Cremonese 3-0 thanks to three goals in 17 second-half minutes, while Empoli triumphed over L'Aquila by the same scoreline courtesy of Francesco Tavano's hat-trick.

Sampdoria's Eder matched the feat of Tavano in a 4-1 home win over Como, while elsewhere, Serie B outfit Brescia advanced to the fourth round as Andrea Caracciolo's 88th-minute strike earned a 1-0 victory over Latina.