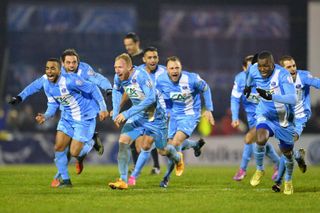 Fourth-tier minnows Trelissac caused a major upset as they made it through to the last 16 of the Coupe de France for the first time in the club's history, courtesy of a 4-2 penalty shoot-out victory over Ligue 1 side Lille.

Despite Rony Lopes putting Lille ahead early on in proceedings in Perigueux, Trelissac fought back through Hamidou Keyta's 56th minute equaliser which forced the tie into extra time.

And despite missing their first penalty of the resulting shoot-out, the amateur side rallied to claim a stunning triumph.

Lille's Ligue 1 counterparts Monaco also required extra time in their tie against Evian, though the principality club did manage to prevail against their Ligue 2 opponents 3-1.

Meanwhile, Marseille put their league troubles behind them as they eased past their local rivals Montpellier 2-0 at the Stade Velodrome, while two goals within three minutes saw Lyon overcome Chambly 2-0.

Troyes and Lorient both claimed 3-1 away victories over Concarneau and Boulogne respectively, though the latter required extra time to do so.

Elsewhere, Nantes secured their place in the next round with a 1-0 victory at Mantes thanks to United States international Alejandro Bedoya's extra-time goal.