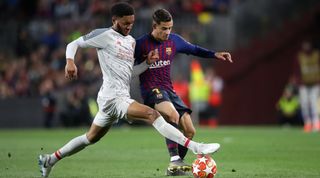 The Brazilian joined the Spanish giants in January 2018 from Liverpool for a club record €160 million, but has struggled to replicate the form he showed at Anfield.

ESPN FC has reported that he will be the first casualty of a summer reshuffle in the wake of the club’s spectacular Champions League collapse.

Barcelona led 3-0 going into the second leg of their semi-final against Liverpool on Merseyside on Tuesday, but fell to a stunning 4-0 defeat to be knocked out.

A club source told the outlet in the wake of the defeat: "Coutinho is not a Barcelona player, that's been made clear.

“He has added nothing,” the source added. “He will leave in the summer.”

Coutinho was substituted after an hour in both legs of the semi-final, and the club hierarchy are said to have acknowledged that his signing has been a failure.

The 26-year-old, who has been linked with a summer move to Manchester United or Chelsea, has scored 11 goals in 52 appearances in all competitions this season.