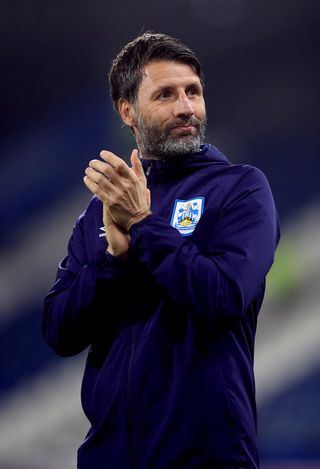 Boss Danny Cowley says the whole ethos at Huddersfield shone through in their vital 2-0 home win over QPR.

The Terriers recorded a crucial victory to move six points clear of the Championship relegation places.

Both their goals came within the space of four second-half minutes, with Elias Kachunga scoring the opener and then winning the penalty for the second, which Steve Mounie put away.

Cowley said: “That was an important win in a tough game. We’ve had a difficult period as a club and there’s so much will inside this stadium.

“Once we scored you could feel that relief disappear and we played much better.

“We were playing into a strong wind in the first half, which made it difficult. We started well but our intensity faded after about 10 minutes.

“We showed real energy, particularly in the second half. I thought off our first goal, we became significantly more confident and that showed.”

The first half was an affair dominated by the visitors.

The lively Eberechi Eze in particular was causing plenty of problems for the hosts’ defence.

First, he dinked a ball into the box which picked out Jordan Hugill, but the forward could only place his effort into the side-netting.

Eze was enjoying plenty of the ball and after some silky glimpses of skill, he then cut inside and unleashed a shot which Jonas Lossl, making his first appearance since rejoining Town on loan from Everton, did well to parry away.

After another fine flowing move, Luke Amos then saw a vicious shot tipped over by Lossl.

From the resulting corner, Rangers skipper Grant Hall planted a header against a post as the visitors upped the ante.

The visitors were without question the dominant team but their failure to convert chances came back to haunt them after the restart.

Just before the hour, Juninho Bacuna wriggled away from his marker and fed Harry Toffolo, whose cross hung in the air and allowed Kachunga to head home from just a couple of yards out.

It got even better for the hosts just four minutes later when they doubled their advantage via a Mounie penalty.

It came gift-wrapped from QPR after goalkeeper Liam Kelly cheaply gave the ball away to Emile Smith-Rowe, who ventured forward and fed Kachunga.

The forward was then clumsily tripped up by Lee Wallace in the box and Mounie did the necessary from the resulting spot-kick.

Huddersfield could and should have added further to their tally but Kachunga and sub Andy King wasted the chance to add gloss late on.

For QPR, this was a third straight league loss and they now sit just three points above the Terriers.

Beleaguered boss Mark Warburton said: “You’ve got to take your chances and I sound like a broken record at the moment.

“We looked a very good team in the first half. We were dominant and moved the ball well, but we didn’t put it away.

“We were just a little bit toothless. It’s the same message I’m repeating in the last few weeks.

“Good teams score goals and ultimately we have to be clinical.

“For their first goal, we are attacking. We don’t track a runner and we pay the price. And the second goal is a set-piece.

“You have to demand that you work hard as a team and set standards as a squad.”