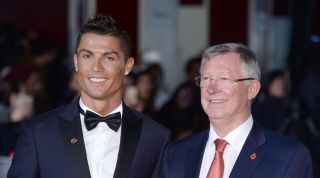 Ronaldo won the award for a 10th time after starring in Juve's Serie A triumph and Portugal's victory at the Nations League Finals.

And Ferguson, who worked with Ronaldo at Old Trafford between 2003 and 2009, praised the 34-year-old after he scooped the prize.

"Congratulations on a great achievement," Ferguson said. "I'm really sorry I can't be with you.

"I look back, I see as a young lad at 17 years of age when you came to Manchester United, how you've progressed as a human being and a fantastic sportsman.

"I want to say to you, your mother, all your family and your kids; well done. You have been a pleasure for me to have known, to have worked with and to have seen you progress into the footballer you are. Good luck, have a great night and well done."

Ronaldo is expected to win his 159th Portugal cap when Fernando Santos's side face Serbia on Saturday.