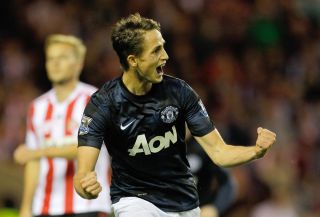 As debate over Januzaj's eligibility rages on following his breakout performance in United's 2-1 Premier League win over Sunderland on Saturday, Croatia emerged as the latest country to declare an interest in the Belgium-born player.

Januzaj is eligible to qualify for Belgium, Albania, Serbia and Turkey, but Croatia are also attempting to woo the 18-year-old.

Croatia Under-21 manager Ivo Susak confirmed that Januzaj was of interest to them, and that they hoped to sit down with him in the near future.

"One of the managers from Albania has told me that Adnan's mother is from Croatia so we are of course interested in him," Susak told Croatian newspaper Sportske Novosti.

"His potential is amazing but we know we are facing an uphill battle for him.

"As for now, he has no Croatian papers so this is an important issue. We are yet to speak with him but we are of course planning talks with this young player."

England have also registered an interest in Januzaj, but he is ineligible to play for the country unless the home nations agreement is amended.