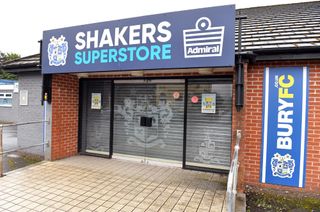 MP Damian Collins has called for a full review of the English Football League’s role in Bury’s demise.

Collins, chairman of the Digital, Culture, Media and Sport Committee, claimed the EFL has let Bury’s fans down after expelling the club from its competition and said new laws were needed to safeguard other clubs from potential rogue owners.

Bury’s EFL membership was withdrawn by the governing body at 11pm on Tuesday night following the collapse of a takeover and after the Shakers had failed to show they could pay their debts.

The process run by @efl has failed fans of @buryfcofficial & may do the same to @OfficialBWFC Next week @CommonsCMS will discuss how we can review the role of the football authorities in this crisis & what new powers are needed to act against bad owners and directors of clubs.— Damian Collins (@DamianCollins) August 28, 2019

“The process run by @efl has failed fans of @buryfcofficial & may do the same to @OfficialBWFC,” Collins, also MP for Folkestone and Hythe, tweeted.

“Next week @CommonsCMS will discuss how we can review the role of the football authorities in this crisis & what new powers are needed to act against bad owners and directors of clubs.”

Shakers owner Steve Dale had been given until 5pm on Tuesday to come up with a plan for paying the club’s debts and funding them going forward or sell them to someone who can.

It had been hoped that C&N Sporting Risk would complete a takeover, but the London-based firm pulled out of the deal 90 minutes before the deadline, citing concerns over the club’s confusing debt structure.

Dale then claimed he had received three new bids for the club, prompting fans, politicians and pundits to call for more time to explore these options, but, shortly after 11pm, the league confirmed its decision.

“We were just going to face challenges that were insurmountable to allow us to do what we wanted to do if we took over the club,” C&N’s Rory Campbell told BBC Radio 5 Live.

His colleague Henry Newman added: “It was financially unsustainable and it’s absolutely imperative that structures are put in place to ensure that something like this can’t happen again.”

EFL executive chair Debbie Jevans said on Tuesday night that it “was undoubtedly one of the darkest days in the league’s recent history” and revealed on Wednesday morning that she was “devastated”.

Jevans told BBC Radio 4’s Today programme: “This is an action that was taken, that was done with much regret and I’m feeling devastated to be here talking to you.”

The EFL had already postponed Bury’s first five scheduled league games and kicked them out of the EFL Cup, making it clear to Dale there would be no more added time after the last deadline was extended on Friday night.

Jevans said: “We simply ran out of time, having already postponed five matches, it would have been six matches. We were struggling to fit that in and it was with deep regret that we just couldn’t go on anymore.”

Jevans insisted the EFL had done all it could to save the Sky Bet League One club, but lessons needed to be learned.

She added: “I’m speaking personally, I’m speaking for myself here, I think absolutely we need to look at the spend of clubs as much as the revenues and looking at salary caps is absolutely something that I think the clubs should consider.”

League One will proceed with 23 clubs for the remainder of the season and only three clubs will be relegated in order to bring the division back to 24 teams next season.

It is with great sadness to hear that Bury have been expelled from the English Football League after a takeover bid from C&N Sporting Risk collapsed.— PFA | Professional Footballers' Association (@PFA) August 28, 2019

The Professional Footballers Association said it had also done all it could to help save Bury.

“We have been in regular communication with the players, the EFL and the club over the last eight months to try and protect our members and secure a long-term future for Bury FC,” a PFA statement read.

“Unfortunately, despite our efforts to support the process, the club has been unable to fulfil its financial commitments or complete a possible take-over deal.

“This will be a desperately sad time for Bury’s players and staff.”

The PFA said it would continue to support all its members who had been impacted by Bury’s collapse, “including former players, the remaining players who are contracted at the club and also those who were hoping to sign contracts”.

The PFA added: “Our thoughts in particular go out to the supporters, the town and the wider community who will be devastated by this news.”