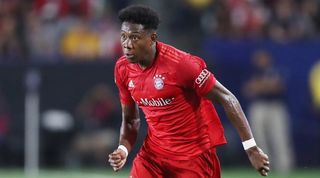 Mundo Deportivo reports that the Austria international is on the market this summer and has been used by the German champions as a makeweight in transfer talks.

Bayern secured the €80 million signing of Lucas Hernandez from Atletico Madrid this summer, who is likely to take Alaba’s left-back spot.

The versatile defender has a contract until 2021 in Bavaria but has refused to renew and Bayern are said to have used him in offers for Sané and Barcelona’s Ousmane Dembele.

However, they failed in their efforts to land Sané by including Alaba as part of a deal to lower the price, after Pep Guardiola rejected the proposal.

The Bundesliga giants then turned their attention to Dembele, who could be sacrificed by the Camp Nou club this summer as they look to bring back Neymar from PSG.

However, Bayern were again turned down with a cash-plus-Alaba bid, as Barça are not convinced they will be able to sign Neymar and want to give Dembele a second chance.