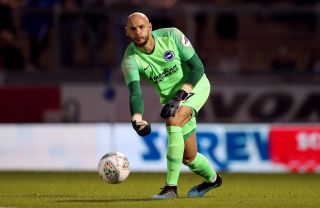 Goalkeeper David Button is confident any one of the Brighton squad will be ready to quickly get into their rhythm for the Carabao Cup tie against Aston Villa.

Seagulls boss Graham Potter will again rotate his team on Wednesday night, with Button set to take over from Mathew Ryan between the posts.

The 30-year-old former Brentford and Fulham stopper maintains whatever team is selected for the cup tie, each man will be determined to make the most of an opportunity to impress.

“It is a chance for players who do not play so much to hopefully show the manager what they can do and hopefully push themselves into his thoughts,” Button said.

“It is not as easy as playing every week when you get into your rhythm, so it can be a little bit challenging.

“But with the environment we have got here, we push each other every day, so we know we are always training at our top level.

“Then come the games, you just hope that pays off and you show people what you can do.”

Brighton drew 0-0 at Newcastle on Sunday, in a match which they could well have taken all three points but for Fabian Schar’s acrobatic clearance to knock Aaron Connolly’s goal-bound effort off the line.

It leaves the Seagulls, who won 2-1 at Bristol Rovers in the last round of the Carabao Cup, with just one Premier League victory – away to Watford on the opening weekend.

Button, though, sees plenty of potential ahead.

“Performance wise it has been really good it has just been a shame we have not been able to convert them into wins,” the goalkeeper said at a press conference.

“But we see it as positive and hopefully the results will follow.

“It is just persisting with what the manager wants and hoping that it will change for is.”

Potter views Wednesday’s cup fixture as a welcome opportunity to “look at the squad in it’s entirety”.

Forwards Glenn Murray (ankle) and Neal Maupay (knee) are expected to be rested, with one eye on Saturday’s Premier League match at Chelsea.

Midfielder Yves Bissouma could be drafted in having coming off the bench at Newcastle following recovery from shoulder surgery.

Potter said: “You can look at some young players and see how they cope in that environment, as well as giving opportunities to other players who may not have featured.”