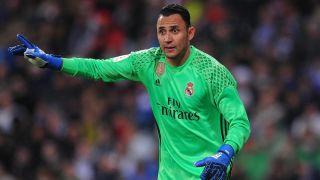 Goalkeeper Keylor Navas wants to stay at Real Madrid "for many years to come" as speculation regarding David de Gea intensifies again.

Manchester United star and Spain international De Gea is being tipped to finally make the move to Madrid after his proposed transfer in 2015 collapsed late in the window.

However, Navas is not fussed about the widespread and ongoing reports after helping Madrid reach the Champions League final on Wednesday.

"I want to stay at Real Madrid for many years to come," the 30-year-old Costa Rican said after Madrid lost the second leg 2-1 at Atletico Madrid but advanced 4-2 on aggregate.

"I don't care what people say, I just do my job.

"I notice the fans' support, it makes me feel well-liked."

Navas added: "It hasn't been an easy year for me. Having a reduced pre-season was a major burden for me but now I'm feeling great.

"I'm grateful for being able to play these sorts of matches."

Madrid now have the chance to defend their Champions League crown against Juventus in Cardiff on June 3.

"We are very happy to reach the final again, we will be facing a tough opponent," Navas said.