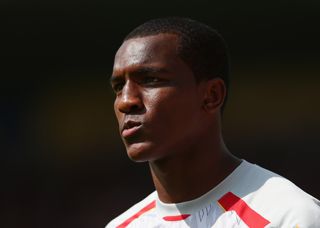 The 20-year-old made 12 starts in the Premier League last season, but has only featured in two matches in the current league campaign.

The close-season signings of Mamadou Sakho, Kolo Toure and Tiago Ilori have pushed him down the pecking order at Anfield, and Brendan Rodgers has agreed a spell of first-team football in the Championship will be beneficial for Wisdom's development.

Wisdom – who is a product of Liverpool's youth academy - is new Derby head coach Steve McClaren's second loan signing in the last seven days having agreed a short-term deal with Tottenham for Simon Dawkins on Friday.

McClaren is looking forward to working with the young defender and expects Wisdom to provide much needed defensive cover at Pride Park.

"Andre is a very good and a promising player who we're delighted to welcome to Derby County," he told the club's official website.

"Liverpool obviously think a lot of him but he's at the stage of his development where he needs to play some first-team games, and we're delighted they see Derby as the place to do that.

"We've had a few injuries in defence of late and Andre will bring extra qualities as well as more competition for places, which is always welcome."

Wisdom – who is captain of the England Under-21 side – is expected to make his debut in Derby's match with Birmingham City on Saturday.