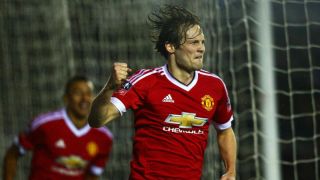 Wayne Rooney continued his recent renaissance as his sixth goal in as many games - a brilliant curling shot – gave the visitors an early lead at the iPro Stadium.

Derby levelled before the break through George Thorne's well-taken strike, but cool finishes from Blind and Mata inside the final 25 minutes saw United progress over their Championship opponents.

In the build-up to the game, Van Gaal angrily denied reports he had offered to resign following defeat to Southampton last time out and this victory should buy him time as he looks to turn the club's season around.

With United sitting fifth in the Premier League and their chances in the Champions League and League Cup already over, the FA Cup and the Europa League are their only remaining realistic chances of silverware.

The Dutchman made two changes to his team as Guillermo Varela and Mata replaced the injured Matteo Darmian and Ander Herrera, who dropped to the substitutes' bench, while hosts Derby were unchanged despite losing 4-1 to Burnley last time out.

Anthony Martial threatened early on, but failed to find the target from an excellent position after a good move involving Rooney and Marouane Fellaini, before the England captain put United ahead in emphatic fashion in the 16th minute.

After exchanging passes with Martial at the left corner of the penalty area, Rooney ignored claims of offside to curl a wonderful dipping effort past Scott Carson and into the far corner.

David de Gea was equal to Nick Blackman's back-post header as the hosts looked for a swift response, but the Spain goalkeeper was unable to prevent a 37th-minute equaliser.

A clever pass from Chris Martin sent Thorne clear in significant space as he raced through the middle of United's defence and the midfielder smoothly took one touch before beating De Gea with a left-footed strike.

Blackman then cut inside and lashed an effort just wide as Derby went into the half-time break with the momentum.

Another Blackman shot was just off-target at the start of the second half, while Mata was narrowly wide with a close-range diving header at the other end after Jesse Lingard's cross deflected into his path.

With 65 minutes on the clock, United moved back in front. A good passing move led to Lingard's low cross from the right which found centre-back Blind and he finished with an impressive first-time shot.

The win was sealed with seven minutes remaining when Martial, who was a persistent threat down the left, found Mata after a good run and cut-back, with the Spain playmaker finding the bottom corner for his first goal in 15 games.