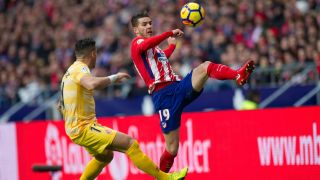 The highly rated 21-year-old is eligible for both Spain and France, with both nations said to be eager for Lucas to declare for them.

Although he – like younger brother and Real Madrid left-back Theo Hernandez – was born in Marseille, Lucas has spent much of his life in Spain, initially joining the youth ranks of Rayo Majadahonda in 2005 before moving to Atletico two years later.

Lucas has represented France in most youth categories, including the Under-21s, though there has still been speculation as to whether or not he will pledge his senior international future to the country of his birth.

However, he has perhaps given the clearest indication yet that France will indeed be the ones to benefit, as Lucas revealed he has spoken with national team coach Deschamps.

"I am French, I have a French passport," he told AS.

"We are looking at things and it is in the hands of lawyers. I have to be calm. I've spoken to Deschamps and he knows what I think."

Lucas played the full match on Saturday as Atletico were held to a 1-1 draw by promoted Girona at the Wanda Metropolitano, rounding off a disappointing week which also saw them beaten 2-1 at home in the first leg of the Copa del Rey quarter-final by a Sevilla team who had been struggling for form.

Up next for Atletico on Tuesday is the return leg at the Ramon Sanchez Pizjuan and Lucas says they go there with "immense desire" to turn things around and secure a semi-final place.

"Immense desire we feel for the match," he said. "We come from a difficult result, but we have hope to progress and everyone must believe in us because we go there for everything."