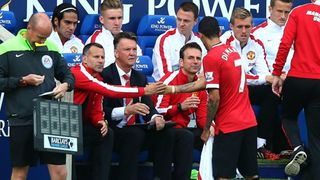 Manchester United manager Louis van Gaal accused Angel di Maria of failing to take responsibility for his disappointing and brief spell at Old Trafford after the Paris Saint-Germain winger hit out at the Dutchman.

British record signing Di Maria and Van Gaal did not see eye-to-eye during the Argentina international's one-season stay in Manchester before he was shipped off to the French champions.

Now flying high in Paris, having helped guide PSG to a fourth successive Ligue 1 title, Di Maria insisted he does not regret his departure, while complaining that he was played out of position by Van Gaal.

Van Gaal hit back afterwards, telling reporters: "I have never seen [many] players who look at themselves, who look to the way they have performed.

"It is always the fault of the manager.

"Unfortunately it is my life as a manager. It is always like that."