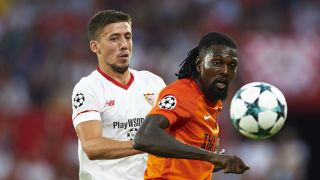 Emmanuel Adebayor has tinges of regret over his time in football, but has not ruled out muscling in on the Ballon d'Or conversation as he targets a first league title of his career.

Adebayor has played for Arsenal, Manchester City, Real Madrid and Tottenham, though his sole major trophy came at the Santiago Bernabeu, where a six-month loan took in a Copa del Rey triumph for Los Blancos.

The Togo striker could be set for a league glory in 2017-18, though, having top-scored in Istanbul Basaksehir's march to the summit of the Super Lig at the mid-season break.

Though frustrated with his lot thus far, Adebayor is refusing to give up "dreaming" of landing big prizes.

"I had dreamt of playing for Arsenal and Real Madrid and those dreams came true," Adebayor told Hurriyet.

"Maybe I can dream of winning the Ballon d'Or and that can come true as well.

"I'm not really happy with my football career but I can't complain about it either. I'm still alive, so I can keep dreaming."

Adebayor also reflected on the coaches he had worked under, reserving praise for Jose Mourinho and "professor" Arsene Wenger, although he was far from impressed with how Roberto Mancini operated.

"The worst coach I have ever had was Roberto Mancini," the 33-year-old explained. "I never liked his training methods.

"The best coach I have ever worked with is certainly Jose Mourinho. He has an unparalleled passion."