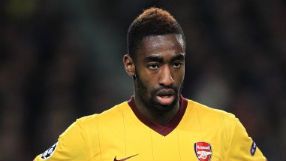 "There isn't a need for reconstructive surgery and he will now begin a period of rehabilitation on the shoulder before returning to training in around a month," the London club said on their website on Tuesday.

The Swiss international dislocated his shoulder in this month's 2-0 FA Cup quarter-final defeat by Manchester United. Play was held up for more than five minutes while he was given oxygen before being carried off on a stretcher.