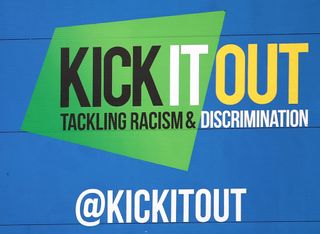 Hate crime reports at football matches rose by almost 50 per cent during the 2018-19 season compared to the previous campaign.

Data released by the Home Office on Thursday stated that incidents of hate crime were reported at 193 matches between August 1, 2018 and July 31, 2019, a 47 per cent rise compared to 131 matches the year before.

The Home Office report said that of those hate crime incidents, 79 per cent related to race. It stated that the increase may be due to improvements in recording the data.

⚽️ Ever wonder what we do to support victims of discrimination?— Kick It Out (@kickitout) September 3, 2019

However, it is twice as many as the number of arrests for the same offence in 2016-17 – just seven.

The figures also showed that the number of new football banning orders issued during the 2018-19 season rose by 19 per cent compared to the previous year.

Supporters of Sky Bet Championship club Stoke were issued the highest number of new banning orders during that time – 46.

Their Staffordshire neighbours Port Vale in League Two were second on the list with 31.

Supporters of Premier League club Newcastle have the most banning orders in force overall at 71, eight fewer than in the previous season.

The duration of a banning order, which are used to bar individuals from attending matches and in some cases can require them to surrender their passports ahead of overseas fixtures, can range from a minimum of three years up to a maximum of 10 years.

The data also showed that football-related arrests had dropped by 10 per cent in 2018-19 compared to the previous season.

The clubs with the highest number of arrests were Stoke (80), Leeds (49) and Aston Villa (42) according to the data.

Stoke have been contacted by the PA news agency for a response to the statistics.

Of the 1,381 arrests under Schedule 1 of the Football Spectators Act 1989, the most common types of offence were public disorder (38 per cent) and violent disorder (19 per cent).

We carry out unannounced patrols in stations and on trains nationwide.— British Transport Police (@BTP) August 18, 2019

A further 155 were made by British Transport Police and there were 347 ‘other’ arrests at football matches which did not fall under Schedule 1 of the Football Spectators Act.

The statistics are supplied by the 43 police forces in England and Wales and British Transport Police (BTP) to the United Kingdom Football Policing Unit (UKFPU).