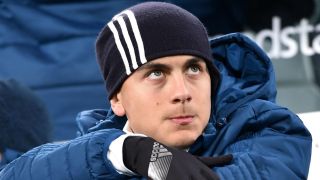 Dybala was relegated to the bench against both Inter and Bologna, but is set to come back into the XI for the Coppa Italia clash with Genoa on Wednesday.

The 24-year-old has netted 12 times in Serie A this season - already one more than he managed last term - although he has only scored once in his last 10 competitive appearances.

He will be joined in the squad for Tuesday's last-16 encounter by returning pair Giorgio Chiellini and Stephan Lichtsteiner, while Gianluigi Buffon, Mario Mandzukic and Juan Cuadrado are all sidelined.

"Dybala is a player capable of 15 to 20 goals in the league. When he gets 20 then he will have done a lot," Allegri said at his pre-match news conference.

"And his characteristics go beyond that. Dybala is a player who must provide assists and score goals because he is not just a poacher.

"Like the others, Paulo is an intelligent player who knows that tomorrow is an important game for him and for Juventus.

"We have had a different system of play in the last few games and I pulled him out, it is very simple. When Paulo plays, we need to exploit the characteristics he has."

The journey begins tomorrow for the Bianconeri. gives his thoughts on  December 19, 2017

Allegri said he would need to decide whether to play Dybala as a single centre-forward or partner him with Gonzalo Higuain.

Marko Pjaca is also an option having sufficiently recovered from a long-term knee injury to sit on the bench in the weekend win over Bologna.