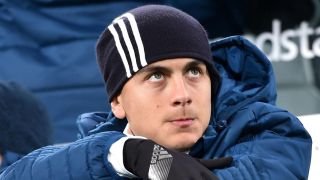 Paulo Dybala should heed Pavel Nedved's advice if he wants to become one of the leading stars in world football, according to Juventus captain Gianluigi Buffon.

Speaking at the Champions League draw earlier this week, Juve vice-president Nedved advised Argentina international Dybala to "focus on his football and make lots of sacrifices in his private life" after being dropped to the bench for the 0-0 Derby d'Italia draw with Inter.

The former Czech Republic international won the Ballon d'Or in 2003, while veteran goalkeeper Buffon came fourth in the voting for the 2017 award.

Dybala is viewed as one of the next generation who could pick up the baton when Cristiano Ronaldo and Lionel Messi's dominance of football's major individual prize comes to an end and Buffon believes the 24-year-old is wise enough to take Nedved's message on board.

"I think we have to consider Pavel Nedved's words in a different way," he told reporters.

"Nedved is really experienced and he gave a suggestion to a young champion who may become the best one.

"Paulo Dybala should be happy about that. Nedved did not talk banally. He said useful things, helping him to become the number one if these words are accepted in the right way.

"If you do not accept these words in the right way you can struggle a little bit. Paulo Dybala is too clever to not understand that."

Dybala has 12 goals in 16 Serie A appearances this season, although the return is based largely on a flying start to the campaign for the reigning champions. He has one goal from his past eight starts across all competitions.