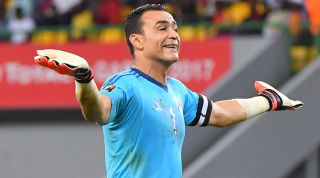 Egypt’s goalkeeper has already smashed all age records in the Africa Cup of Nations and he’s now set on winning an impressive fifth continental title, having helped the Pharaohs to this year's final in Gabon, where they face Cameroon.

The net-minder, who made his internatioal debut in 1996, has a daughter almost as old as the squad's youngest player, Ramadan Sobhi of Stoke, who turned 20 one week ago.

He has conceded only one goal throughout the entire tournament, and proved to be the hero in Egypt's penalty shootout win over Burkina Faso in the first AFCON 2017 semi-final by saving efforts from Kouakou Herve Koffi and Bertrand Traore to see his team through.

Not bad for a keeper who wasn't even meant to be playing – El-Hadary only came on 25 minutes into Egypt's first game after first-choice Ahmed El-Shenawy was injured.

Remarkably, he still harbours ambitions of playing in the 2018 World Cup.

"I will fight to reach the World Cup," El-Hadary told reporters before the tournament. "I don't care about my age; I train like I am 20 years old."