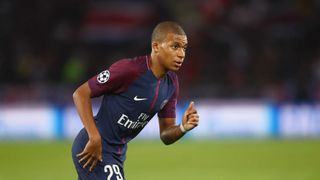 Paris Saint-Germain coach Unai Emery has backed Kylian Mbappe to bounce back when the Ligue 1 giants face Anderlecht in the Champions League.

Mbappe, 18, missed numerous chances in his side's most recent outing, a 2-1 league victory at Dijon on Saturday.

But Emery believes the France international forward will respond if opportunities present themselves again at the Constant Vanden Stock Stadium in Brussels.

"Kylian is a young player and he will learn from experience," he told a news conference on Tuesday.

"It is a good thing for him. Against Dijon, he missed chances but that is part of gaining experience.

"He is intelligent. He adds plenty to the team, not just goals and assists, he also combines well with the others. If he gets similar opportunities here, he can score them."

PSG are top of Group B with two wins from as many matches and having scored eight goals without conceding.

In contrast, their opponents on Wednesday go into the clash having suffered 3-0 losses to Bayern Munich and Celtic.

Nevertheless, Emery said: "We have a lot of respect for all the teams, in France but also in Europe. All the teams that play Champions League are here because they deserve it.

"In the history of football, Anderlecht is a great team, here in Belgium but also in Europe.

"When I was a kid, when I watched Spanish football and foreign football, I knew Anderlecht, whom I watched.

"It's true that they didn't start very well in the Champions League and in the Belgian league. But during the preparations for this game, we analysed that it is a good team, with quality players.

"They changed their coach recently. He [Hein Vanhaezebrouck] is a coach who won the championship with Gent two years ago. With his desire and experience as a coach, he will try to do a good job here with Anderlecht.

"It will be a good opportunity for them, in front of their supporters. We will show them respect, and we will prepare this match to be at 100 per cent."