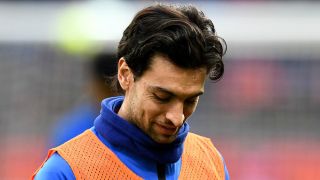 Paris Saint-Germain head coach Unai Emery says Javier Pastore's comments about wanting to leave the club do not reflect his own conversations with the player.

Pastore told the media he is considering a move to Inter in a bid for more first-team football to boost his chances of being included in Argentina's squad for the World Cup.

Emery disciplined Pastore when he returned late from Ligue 1's winter break, but the PSG coach is keen to keep the playmaker, who has scored four league goals this term.

"I spoke to Pastore and the things he told the press is not what he told me," Emery told a news conference on Monday.

"My opinion? I want him to stay because he's an important player. But he wants to play more for the World Cup.

"Last year he was often injured but every time he was available, he played. This year is the same.

"Maybe he didn't play the minutes he wanted to play but he played. Anyway, now it's between him and the club."

PSG face Rennes in the semi-final of the Coupe de la Ligue on Tuesday and Emery expects a trio of midfielders - including new signing Lassana Diarra - to be absent.

But after being hurt in a heavy collision with Lyon goalkeeper Anthony Lopes in a 2-1 defeat on February 21, Kylian Mbappe may be ready to return to action.

"[Thiago] Motta is working with a physiotherapist," Emery said. "Mbappe trained yesterday but needs to get the doctor's approval.

"[Marco] Verratti missed the two last games and had his little boy yesterday. Lassana Diarra needs to train more in order to enter the group."

With PSG competing on multiple front, the Rennes encounter is an opportunity to book a place in a domestic final, but attention is already turning to next month's last 16 Champions League clash with Real Madrid.

Zinedine Zidane accepts his future at Los Blancos rests on the blockbuster tie, with Madrid well off the pace set by rivals Barcelona in LaLiga, while they suffered a shock Copa del Rey defeat against Leganes.

That quarter-final defeat has cleared Madrid's schedule somewhat in the build-up to February 14's first leg, but Emery does not think the number of extra games PSG are set to play will make a difference.

"It's true that because Real Madrid have been eliminated from Copa del Rey, we will play more games than them," Emery added.

"But we keep on. We need to deal with players minutes on the field. Verratti and Mbappe played less, it's good for us."