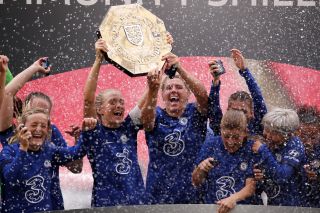 Chelsea manager Emma Hayes believes the women’s Community Shield was a “great way to start the season” after her side overcame Manchester City in an entertaining Wembley clash.

The 2-0 success saw Chelsea become the first team to win the women’s Community Shield since 2008, but the coronavirus pandemic meant the momentous match was played out in front of empty stands at England’s national stadium.

“It’s a great testament to the FA for putting this fixture on,” Blues manager Hayes said. “You’ve got two wonderful teams at Wembley.

“It’s such a shame there wasn’t a crowd today because you saw from the quality on show that these are two outstanding sides.

“I think it was a great way to start the season and hopefully the broadcasting numbers confirm that.

“Today was for the fans because when you’ve got a group of people that follow you up and down the country, and it’s a growing group, I’m gutted for them that they couldn’t be there today.”

Bright’s thumping effort came shortly after City midfielder Jill Scott was sent off for two bookable offences and saved the blushes of star striker Sam Kerr, who missed a glut of opportunities.

Asked if the Australia international is looking for confidence after her move to the Blues, Hayes said: “I don’t think so. I think Sam ran well for the team today. She caused problems, she created chances.

“I think if you have got a striker who isn’t creating chances, that’s a concern. I think Sam has been outstanding in pre-season and I expect she’ll be on the training pitch tomorrow working at finishing. But I’m not disappointed with anything in her game today.”

“Yeah, it was definitely the game-changer,” he said. “It took me by surprise in all honesty because I didn’t think there was much in it.

“I probably need to see need it again on a few occasions but obviously then it’s going to be a little bit difficult because I thought until that point it was quite a close game.

“Both teams had some good opportunities but that’s obviously going to make an impact.”