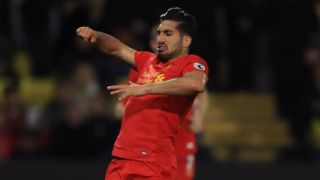 Emre Can reflected on the "best goal I ever scored" after his sensational bicycle kick helped Liverpool secure a potentially priceless 1-0 win at Watford.

The Germany midfielder leapt at Lucas Leiva's dinked pass into the area before acrobatically beating Heurelho Gomes to put the Reds in front at Vicarage Road on the stroke of half-time.

It proved a decisive goal for Liverpool, who had earlier hit the crossbar through the returning Adam Lallana, and they are now four points clear of fifth-placed Manchester United – albeit having played a game more – in the race for Champions League football.

"I never scored a goal like that, maybe just when I was younger," he told Sky Sports.

"The most important thing is we got three points, we knew before the game what happened with the results [from our rivals].

"I saw the space and then I ran behind then. I didn't think too much, didn't score too many like that. I'm happy I can help the team. It is the best goal I ever scored."

"You know, I think sometimes we are too scared, we have to have confidence we can clear the ball, I'm just happy we got the three points."