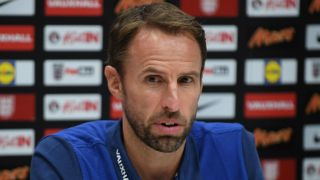 England manager Gareth Southgate said his players must get supporters on their feet when they face Slovakia on Monday but called for strong backing from the Wembley crowd.

Despite winning 4-0, England laboured at times during their victory over Malta on Friday, as two goals from Harry Kane and further strikes by Ryan Bertrand and Danny Welbeck ensured a flattering scoreline.

And Southgate said players and fans must share the responsibility for creating a winning atmosphere at Wembley.

Gareth: "It's a great opportunity for the crowd to get behind us – and we have a responsibility to get them on their feet." September 3, 2017

"We have a responsibility to get them on their feet, but equally everywhere we go around the world, the opposition crowds really give the team a lift.

"This result can virtually get us to Russia - everybody wants that - and it would be great if we get the level of support that I know that stadium can bring."

Southgate, who has not lost a competitive fixture since his appointment as England manager, said: "We are playing good opposition so we've got to make sure we are tactically prepared, which we will be, but also we've got to have belief in the team that we've got.

"We've got some exciting players and we want to show that. We know the task we have; we know the opportunity.

"The whole country wants to be at a World Cup."