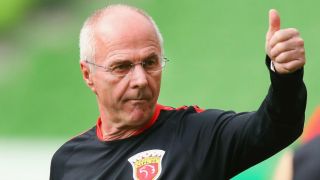 The Three Lions are on a high after Tuesday's penalty shoot-out victory over Colombia following a 1-1 draw, which booked them a trip to Samara to face a Sweden side Eriksson rates highly for their defensive resilience and team ethic.

Janne Andersson's men have won three of their four World Cup matches so far, scoring six goals and keeping a trio of clean sheets as they topped Group F and beat Switzerland 1-0 in the last 16.

Eriksson, who managed England to 40 victories and only 10 defeats between 2001 and 2006, said his home nation would prove a stern test for his former employers.

"It was great to see England winning on penalties, they were mentally very strong," the 70-year-old told Sky Sports News.

"If England think they will have an easy match on Saturday, that's a big mistake. I think it could be very difficult.

"It's difficult for Sweden as well, but to score against them is extremely difficult.

"[England] have the players individually to do something special - [Harry] Kane is one, [Raheem] Sterling is another. But when I tell you it's difficult to beat Sweden, it's the truth. Italy tried in the qualifiers for 180 mins and they didn't score. Germany only scored a free kick at the end.

Eriksson, who said he "feels a little bit English", thinks Sweden are thriving despite Zlatan Ibrahimovic's international retirement in 2016.

Ibrahimovic is Sweden's all-time leading goalscorer having struck 62 times in 116 appearances, but Eriksson highlighted Andersson's team has collective rather than individual strength.

"If one is suspended, they put in another one and you can't see the difference," said Eriksson.

"Sweden doesn't have a Kane or Sterling or Neymar. It's a collective. They do things together and work extremely hard.

"I said some weeks ago that England can go very far. Young players, hungry players. They did very well, were the better team, and deserve to be where they are."