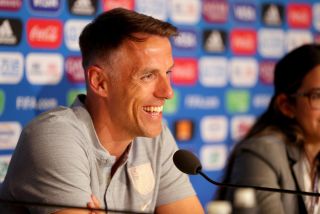 Phil Neville has stressed there is “no point moaning” over the change related to penalties that has been in the spotlight at the Women’s World Cup – and says his England players have “no fear” about the prospect of a shoot-out.

Changes to what is permitted in terms of a goalkeeper’s position when a penalty is taken were among adjustments to the laws of the game that came into effect on June 1.

That was six days before the start of the tournament in France, the first Women’s World Cup where VAR would be in use.

The group stage subsequently saw three spot-kicks retaken after VAR ruled the goalkeepers, who were booked, had not had at least part of one foot touching or in line with the goal line when the ball was struck.

Scotland’s Lee Alexander was one of the goalkeepers concerned, in the 3-3 draw with Argentina that saw Shelley Kerr’s side knocked out.

On Friday, the International Football Association Board announced goalkeepers would not receive a yellow card for encroachment during penalty shoot-outs at the tournament.

England boss Neville was asked about the matter at his press conference ahead Sunday’s last-16 clash with Cameroon in Valenciennes.

And he said: “I think it’s a surprise. But I think we’re best probably speaking about that at the end of the World Cup, my true thoughts, probably on a few things.

“I think we’ve just got to get on with it. The rules are the rules. We’ve had two talks by the referees and the referees have adhered to those rules. There’s nothing we can do about it. The goalkeepers have to deal with it.

“I’ve got three keepers (Karen Bardsley, Carly Telford and Mary Earps), plus Ellie Roebuck (who is training with the England squad), who are probably really frustrated and disappointed and can’t see the reasoning behind it because it puts all the advantage in the forward – and we’ve just got to accept it.”

He added: “They (the goalkeepers) can’t take risks. I don’t think it’s the type of action that you can try to bend the rules and cheat a little bit. It’s there for VAR to see.

“So you’ve just got to get on with it. There’s no point in moaning about it. If there’s a penalty, a penalty shoot-out, my keepers have just got to handle it and abide by the rules and if not, it will be retaken.

“Whether it’s right or wrong it is the rule and everybody at the World Cup maybe should stop moaning about it because it’s not going to change. It’s here for the rest of the duration of the World Cup.

“Our goalkeepers have been practising, we’ve been scrutinising, and they are in a really good place about it. We’ve told them not to get over-dramatic about the situation.”

Penalty shoot-outs were, of course, a major problem for England’s men’s side for so long, with them losing six out of seven at major tournaments before triumphing against Colombia at last summer’s World Cup and then in the Nations League against Switzerland earlier this month.

The women’s team were beaten on penalties in the 1984 European Championships final and in the 2011 World Cup quarter-finals.

Neville says his players have “loved” the spot-kick practice they have been doing in training, and he said: “There is a real feelgood factor about it. There is no fear.”

Captain Steph Houghton, who was part of the squad in 2011, said: “Being involved in a penalty shoot-out before, it’s obviously nerve-wracking but I feel as though we’re really prepared. We’ve practised them a lot.”

England had Houghton’s Manchester City team-mate Bardsley in goal for their opening and concluding games in Group D, the 2-1 win against Scotland and 2-0 victory over Japan, and Chelsea’s Telford in between when they beat Argentina 1-0.

Houghton says she would have “full faith” in the goalkeepers in a shoot-out scenario.

“KB is probably the most prepared keeper I’ve ever played with,” the defender said.

“The keepers do a lot of work. We’ve got four great keepers.

“KB showed what she was about (against Japan), Carly did the same against Argentina.

“When those moments matter, people step up and they’re the match winners. For me, if it came to a shoot-out then I’d have full faith in the keepers we have.”