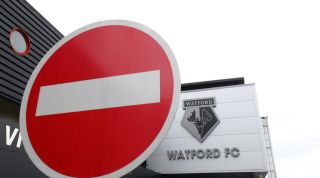 European football is facing the prospect of being placed on hold until September at the earliest, according to reports.

It was announced on Friday that the Premier League, Football League and Women's Super League were all suspended until April 4 amid the coronavirus crisis.

That followed earlier announcements that competitions across Europe, as well as the Champions League and Europa League, had been postponed.

However, the delay could in fact be a great deal longer, according to a story published on Saturday by the Independent.

There were only due to be two more rounds of league fixtures before the March international break, but most national team matches around the globe have been called off.

As things stand English football is set to resume in early April, but it is more likely that the authorities chose that date to bide themselves more time as they attempt to find a solution.

It is still unclear whether the 2019/20 campaign will be declared void or whether it will be extended into and beyond the summer.

Euro 2020 was set to be held across 12 countries in June and July, but there have been suggestions that UEFA could push the tournament back 12 months as COVID-19 continues to sweep across the continent.

UEFA will meet with 55 member associations on Tuesday to plot a path forward, with a representative of FIFPro and the boards of the European Club Association and the European Leagues also set to be present.

The Premier League and Football League had originally planned to continue as usual, but that decision was scrapped on Friday after Arsenal boss Mikel Arteta tested positive for the virus.

The majority of top-flight clubs are against the idea of declaring the campaign null and void, but there may be no other option if the crisis continues to drag on for several months.