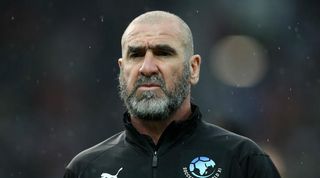 The Frenchman is an immensely popular figure at Old Trafford after winning four Premier League titles and two FA Cups under Alex Ferguson.

Cantona’s cult hero status among United fans means he is still regularly serenaded more than 20 years on from his departure.

But the former forward admits he is afraid of the day when his name no longer reverberates around Old Trafford.

"I feel proud, I feel great and I feel a bit afraid that they will stop – because they will stop one day," Cantona told the official Manchester United podcast.

"What I love about Alex Ferguson is every time there was a new goal, a new challenge.  Even if we were 10 points in front and we have already won the league, we would always try to find a new challenge, new records.

“He is one of the few people I have met who has had a lot of influence on me. It’s like in everything, the people we meet make us.”

Cantona won six major trophies during his United career but the Premier League-FA Cup double of 1995/96 stands out for the Frenchman.

“Maybe when we won the double with a new generation of players,’ he replied when asked about his favourite moment at Old Trafford.

“We won the double with [Paul] Ince and [Mark] Hughes, and then Ferguson knew that the young players were great.

“Because I think it’s important to win things with players coming through the academy. It’s like Barcelona, you are prouder than if you win with the players you buy anywhere.”