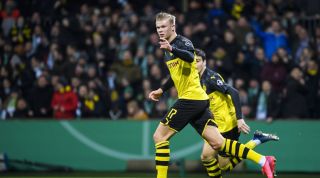 Erling Haaland says he is following the example of Kylian Mbappe as he attempts to continue his progression.

The Norway international was the breakout star of 2019 after scoring 28 goals in 22 games for Red Bull Salzburg in the first half of the current campaign.

His exploits in Austria earned him a January move to Borussia Dortmund, where he has hit the ground running with nine goals in his first six outings.

But Haaland says he is not resting on his laurels and will not be content until he is considered one of the best players on the planet.

"I always said to myself that my dream is to become one of the best players in the world," he told the Bundesliga's official website.

"I knew when I was young that I was good, but you know, it's also a long way to go. When I got my first professional contract in Bryne, I was thinking: 'this is a good thing'. But on the other side, it's nothing compared to others.

"Also, when I was in Salzburg, I started scoring goals there, but if I'm realistic, I look at Kylian Mbappe, he's scoring, he's banging in goals in Ligue 1, so you know, you can always reach a higher level in football.

"I've been here [at Dortmund] one month, but when my team is all so good, it gets easy sometimes to create chances and to play with them, because they’re so good.

"The first second I played with Jadon [Sancho], Marco [Reus], Thorgan [Hazard], you know these guys, it just sits direct, and that's how it is with world-class players."

Haaland's father, Alf-Inge, played for Nottingham Forest, Leeds and Manchester City in his own playing days.

The former midfielder also won 34 caps for Norway, and his son says he still has to improve to reach his father's level.

"No, not yet," Haaland said when asked if he felt he had surpassed Alf-Inge. "He has 34 games for Norway, and I think over 200 games in the Premier League in England, so I'm still missing a bit."