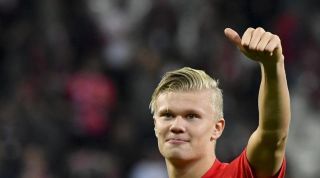 Erling Braut Haaland has described the growing speculation around his future as "f***ing boring".

“The club is good at shielding me a little, but I hope it will be more shielding in the future. It will be difficult, but we will try. I want to be shielded.”

However, he was also full of praise for his former manager at Molde, Ole Gunnar Solskjaer, saying: "He has had a huge impact on my life, both as a person and a trainer. He won the Champions League and was an incredibly good player. He taught me a lot."

Seemingly adding fuel to the fire, he also said: "I have dreamed of playing for the best clubs in the world my whole life, and I especially like English football."

Manchester United are openly in the market for a striker, and with the pre-existing relationship between Solskjaer and Haaland, a move might make sense. However, Arsenal have also been linked with the striker, with scouts watching the Austrian Bundesliga extensively in recent months according to Football London.

Unfortunately for Haaland, if he continues scoring at the rate he has been this season, then speculation is bound to continue.

He's already bagged 18 goals in just 11 appearances in all competitions this season, including four hat-tricks, and has added five assists too, helping Red Bull Salzburg to an eight-point lead at the top of the table in Austria.