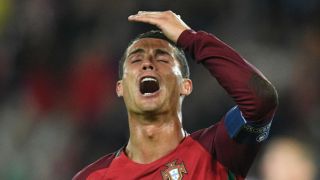 Iceland's stunning Euro 2016 run came to an end on Sunday, but one of their supporters and Gareth Bale's affection for the Manic Street Preachers captured some of the attention on the tournament's 23rd day.

One of the few fun elements of UEFA's nauseating pre-game 'entertainment' prior to all Euro 2016 matches has been kiss-cam, where the camera focuses on two unsuspecting supporters in the stadium and they are expected to share a brief moment for everyone else's enjoyment.

The kisses themselves have ranged from the embarrassed peck on the cheek to the overly-passionate lip-smacker - the latter always guaranteed a loud cheer.

Not content with watching his team emerge as the tournament's surprise package, one Iceland fan went even further before their quarter-final against France at the Stade de France by proposing to his girlfriend.

A brave move considering it could have gone spectacularly wrong. But luckily for him she said yes!

The morning after those tears the night before cannot have been easy for Gianluigi Buffon. Germany full-back Jonas Hector's decisive penalty slipping agonisingly under the veteran goalkeeper's body would be no way for one of the great international careers of the modern era to end.

Buffon has not entirely ruled out carrying on despite his advancing years and fans outside Italy's hotel on Sunday made sure the Juventus icon felt the love.

He wasn't about to hold back either. Those Azzurri supporters look like they never want to let their hero go.

​RONALDO MIC TO BE AUCTIONED FOR CHARITY

Cristiano Ronaldo is no stranger to fits of pique but it seems his latest tantrum will actually result in some good.

The microphone Ronaldo threw into a lake in France after being questioned by a television reporter from a channel with whom he has had issues previously, has been recovered and will be auctioned.

The money raised will go to helping disabled children in the Portuguese star's home city of Funchal on the island of Madeira.

Even Ronaldo can't complain at that.

Although their Euro 2016 adventure was ended in ruthless fashion by hosts France on Sunday, Iceland can still lay claim to the tag of tournament darlings.

The clapping routine performed by their players and supporters following the last-16 win over England was a social media hit.

Not only has it been adopted by fans of other countries - but also the followers watching back in Iceland.

Prior to the France game it was given one more airing by those watching in the capital Reykjavik.

Football and music have traditionally made uneasy bedfellows.

With the notable exception of New Order's World in Motion, which accompanied England's bid to win the 1990 World Cup, most other football-based songs have been largely awful.

And let's not dwell on the times footballers try to do the singing themselves. We are looking at the likes of you Chris Waddle, Basile Boli, Glenn Hoddle and Kevin Keegan...

However, there could be a football-based song about to hit the top of the charts in the United Kingdom, at least if Gareth Bale gets his way. Wales' song for Euro 2016 was Together Stronger (C'mon Wales). Whisper it quietly but it's not THAT bad.