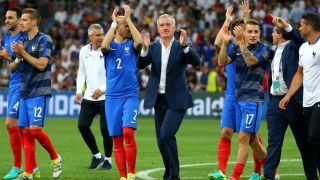 Didier Deschamps praised his players for ending their drought against Germany but the France coach now has his sights firmly set on Euro 2016 glory.

Host nation France had not beaten world champions Germany at a major tournament since 1958 but that all changed on Thursday as Antoine Griezmann's brace secured a 2-0 semi-final victory in Marseille.

Euro 2016's top goalscorer Griezmann broke the deadlock from the penalty spot on the stroke of half-time before he sealed France's passage through to Sunday's final against Portugal with 18 minutes left.

And Deschamps lauded his squad as France look to claim a third European Championship crown.

"We've already [written history]. It was a long time since we'd beaten Germany but that didn't mean anything today," he said.

"We're into the final and there's a trophy up for grabs. I'm delighted for the players, it was a very tough game against a team who made us suffer but we suffered together. When you see the passion and the fervour in the stands around the ground…this team has everything it takes to be loved.

"It's a great emotion – we had to suffer but never gave up and that's great for me. This is a great story – the players wrote history by knocking out Germany.

"We don't have the power to solve people's problems but we can generate emotions so they forget their worries. We generate passion and fervour, we can see that."

Deschamps, who won the 1998 World Cup and Euro 2000, was asked if Thursday's triumph was the best moment since he stopped playing and he added: "It's a great emotion of course, I don't know if it's better than anything else. It's a great moment, a Euro semi at home and you see the ground packed to the rafters. Although we had to suffer we never gave up and that's great."

France now look ahead to Sunday's showdown with Portugal, a quick turnaround for the hosts, who only have two full days' rest.

"It's very short before the final, just three days so we have to savour tonight. I will ensure that even if it's just two or three per cent we will go into Sunday's game in top possible condition," the 47-year-old said.

"Of course, having played football it's not quite the same between three and four recovery days but that's the way the fixtures were published. We had seven days between earlier games and that was too much, but that's just the way it is. We will do everything we can with the medical team.

"We have a chance and Portugal have a chance, just because we are the host nation and beat Germany, it doesn’t give us additional powers. Portugal believe in themselves, we believe in ourselves."