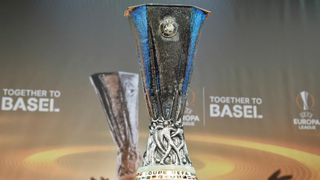 Premier League rivals Manchester United and Liverpool have been drawn to face each other in the Europa League last 16.

The open draw allowed for teams from the same nation to be paired together and sees United and Liverpool pitted against one another for the first time in European competition.

United came from behind to progress past Midtjylland in the last round, while Liverpool saw off Augsburg 1-0 on aggregate.

Tournament favourites Borussia Dortmund have been dealt a tricky tie against another Engligh club in the form of Tottenham, who have already seen off Monaco and Fiorentina in what is proving to be a challenging route to the final.

Dortmund - along with United - are among the clubs looking to win Europe's secondary tournament for the first time.

Basel, whose St Jakob-Park stadium hosts the final, have been drawn against Sevilla - winners for the past two seasons.

United legend Gary Neville avoided being drawn against his former club and is tasked with preparing his Valencia side for a two-legged clash with Athletic Bilbao, while Villarreal meet Bayer Leverkusen in another mouthwatering tie.