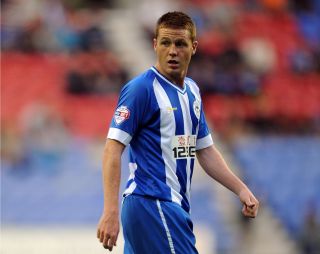 Roberto Martinez has gone back to the DW Stadium for the fourth time after also bringing Antolin Alcaraz, Arouna Kone and Joel Robles to the club after managing them at Wigan last season.

The 16-time Ireland international has cost a fee of £13 million and signed a long-term deal, while Barry and Lukaku arrive at Goodison Park on season-long loan moves from Manchester City and Chelsea respectively.

McCarthy joined Wigan in July 2009 from Hamilton Academical, reportedly turning down ffers from Arsenal and Manchester United in search of regular first-team football.

It proved to be a wise decision as McCarthy made 127 appearances over the last three seasons, scoring eight goals.

The 22-year-old had played in every minute of Wigan's Championship campaign this term after their relegation from the Premier League, but has made a quick return to the top flight.

Barry, 32, joins Everton after falling down the pecking order under Manuel Pellegrini at Manchester City.

He made 41 appearances last season under Robert Mancini, but saw Fernandinho come in for a reported fee of £35m and Barry had failed to make an appearance this season before leaving.

Belgium striker Lukaku has joined on a season-long loan, having spent last season on loan at West Brom, scoring 17 goals in 38 appearances, while he had been linked with a deadline-day return to the Hawthorns.

But he has moved to Goodison Park, where he will link up with international team-mate Kevin Mirallas.

Lukaku made three substitute appearances under Jose Mourinho, but failed to score a goal and missed the crucial final penalty in a shoot-out as Chelsea lost the UEFA Super Cup final to Bayern Munich on Friday.

The 20-year-old has made just 15 appearances at Stamford Bridge since joining from Anderlecht in 2011.

News of Everton's late triple swoop to beat Monday's transfer deadline came as the club announced the depatures of Marouane Fellaini and Victor Anichebe to Manchester United and West Brom for £27.5m and £6m respectively.