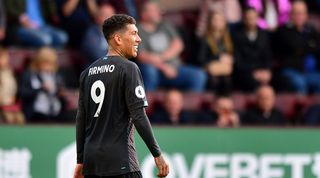 Gary Neville has heaped praise on Roberto Firmino after the Liverpool striker scored the winning goal against Tottenham on Saturday.

Jurgen Klopp's side opened up a 16-point lead at the top of the Premier League table thanks to the Brazilian's first-half strike.

And Neville believes Firmino is now the best player in his position on the planet.

"Any manager in the world would love to have Firmino as their centre-forward," he told Sky Sports.

"I think he’s absolutely incredible. He’s selfless, brilliant, scores goals, sets things up, they can link off him, makes all the right runs, an outstanding player.

"They are outstanding, brilliant to watch and doing everything a championship-winning team should be doing. I can't see anyone stopping them.

"The records for Klopp are incidental right now. The only thing that matters is lifting the Premier League trophy.

"I think the lead is unassailable. Klopp will never say it but his team are playing so well and are so in control and they are still growing and getting better.

"He won't care if he loses one or two games, he just wants that trophy. When we were asking Pep last year about records, because [Manchester] City have won it before they probably could look to beat their previous title victories but for Liverpool it's all about getting that first Premier League title [in 30 years]."

City will move to within 14 points of the Reds with victory over Aston Villa on Sunday.

Liverpool are next in action in a week's time, when fierce rivals Manchester United travel to Anfield.