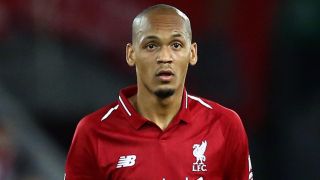 Liverpool midfielder Fabinho says there is no reason for him to leave the club for Paris Saint-Germain in the January transfer window.

It has been reported in France that the Ligue 1 leaders are interested in signing the former Monaco star next month following a difficult first few months at Anfield.

Fabinho, who joined Liverpool for a reported initial fee of £39million in July, has made only six starts under Jurgen Klopp.

However, the Brazil international appears happy to stay and fight for his place as he works to acclimatise to his manager's demands.

"I was told there was something in the press, but I never said I'd like to leave Liverpool," he told UOL when asked about the PSG reports.

"I knew I would need to have patience to wait for my moment. I'm happy at Liverpool. There is no reason for me to leave."

Fabinho had to wait until October to make his first Premier League appearance, while all of his four starts in the top flight have come in the last six weeks, the most recent in Sunday's 1-0 derby win over Everton.

The 25-year-old says Klopp did not given him many clues as to why he was not in the team, but insists he never allowed himself to become dispirited.

"He didn't give me a lot of explanations but I talked in training so I wouldn't be discouraged and to stay focused on my work, without letting my head drop," he added.

"I knew it was a passing moment. I didn't keep moaning and crying. I tried to work because I knew opportunities would come. Now I just want to increase my number of games."