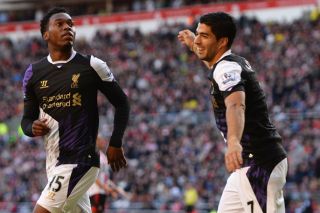 The duo have made a stunning start to the 2013-14 season, scoring a combined total of 14 goals as Liverpool have surged to third in the Premier League table.

Of the five games they have played together, the Suarez and Sturridge partnership - christened the 'SAS' by Liverpool fans - has scored 10 times, leading to several pundits describing them as the best strikeforce in the country.

However, Manchester United defender Rio Ferdinand feels the pair must prove themselves over the course of the season to deserve such a title.

And although he admitted to being impressed by their form, the 34-year-old says the jury is still out.

"In this country and in football in general I think we build people up too quickly," Ferdinand told BT Sport.

"That's not to say they're not a great partnership - they're proven at the moment. They're on top of their game and they're playing very, very well. They've scored some great goals.

"But I think you judge partnerships over a period of time. Look at (Dwight) Yorke and (Andy) Cole, (Teddy) Sheringham and (Alan) Shearer.

"These types of partnerships aren't developed overnight over a course of part of a season, it's over a period of time. So I think it's better to give these people time."

The Suarez and Sturridge partnership will next be tested by Arsenal, with Liverpool travelling to the table-toppers on Saturday.