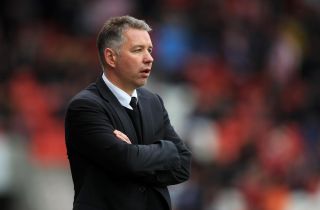 Peterborough manager Darren Ferguson was left cursing a “bad result” after seeing his side’s play-off hopes hit by a last-gasp equaliser at Fleetwood in a match watched by his father Sir Alex Ferguson.

While Ferguson junior was left to rue a missed opportunity for side, who also saw a penalty saved, Fleetwood first-team coach Clint Hill said the 1-1 draw felt like a victory.

Hill took over press duties from boss Joey Barton, who has been in the spotlight this week following an alleged incident in the tunnel following last weekend’s defeat at Barnsley.

Peterborough forward Marcus Maddison saw his 19th-minute penalty saved by Alex Cairns but made up for it by putting Posh ahead in the 64th minute at Highbury.

However, Fleetwood snatched a point when substitute Ash Hunter pounced on a failed clearance from debutant James Hill’s long throw to fire home.

The result leaves seventh-placed Peterborough four points adrift of the top six, and a disappointed Ferguson said: “It is what it is. That is why we are not in the play-offs, because of things like that.

“We need to concentrate for 90 minutes. We know the young lad has a long throw, the ball goes out of play, the centre-half got told to leave it. No communication. Just a bit of composure.

“We were in no danger, then a chance.

“It is a big disappointment and a bad result for us.

“We had to win today. We felt we could and we should have done.”

For Fleetwood, the result leaves them 11th in the table on 57 points, 12 adrift of the play-off spots and the same amount above the relegation zone.

Barton, who on Friday “emphatically” denied all allegations made against him following an alleged tunnel incident at Oakwell which South Yorkshire Police are investigating, did not speak to the press after the draw.

In his place was Hill, who refused to comment when asked about the alleged incident at Barnsley.

Instead, Hill was keen to highlight the character of the players to salvage a draw against play-off chasing Posh.

He also felt Fleetwood should have been awarded a penalty of their own when it looked like Lewie Coyle was tripped by Louis Reed in the first half after Maddison’s spot-kick miss.

Hill said: “It had a bit of everything.

“The fight to go right to the end with a fantastic finish from Ash Hunter too, was nice.

“It sounds weird but it felt like a win.

“A great point for us, we came back from a losing position in a game which earlier in the season I do not feel like we would have come back from.

“We have come back a couple of times which shows the character in the team.”