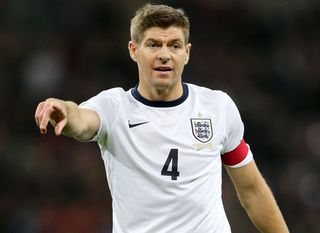 Roy Hodgson's side are on the verge of qualification after victory over Montenegro on Friday, but a failure to secure maximum in the final group game on Tuesday will condemn England to the play-offs if Ukraine beat San Marino.

Poland saw their hopes of reaching the finals extinguished on Friday when they were defeated 1-0 by Ukraine, but they can still have a big say on the outcome of Group H.

England fans and players will not need reminding of a similar clash between the sides in 1973 as Poland left with the hosts crestfallen, Jan Tomaszewski's heroics in goal denying Alf Ramsey's side a win that cost them a place at the World Cup the following year.

The 1-1 draw also cost Ramsey his job and current captain Steven Gerrard has warned his team-mates to maintain their focus to avoid another upset against Poland.

"The job's half done," the midfielder said after the referring to the 4-1 win over Montenegro. "Poland are a very good team.

"They're going to come and do us no favours, like Montenegro, try to make it really difficult for us.

"It's important that we perform to the same level as on Friday night."

England should be confident given they have not lost a competitive fixture since being defeated 4-1 by Germany in June 2010. At Wembley, England's unbeaten run in qualifiers stretches back to November 2007 when a 3-2 loss to Croatia denied the side progression to Euro 2008 and ended Steve McClaren's tenure as manager.

Poland's away form is something of a concern for coach Waldemar Fornalik as the team 65th in the FIFA rankings have won one once on their travels in qualifying, a 5-1 success over San Marino.

Fornalik's men fell to another away defeat last Friday and striker Robert Lewandowski is unsure why Poland continue to struggle.

"Sometimes I wonder exactly what we are missing," he said. "I am thinking in particular of a few draws in the matches we should be winning. There are moments when it seems that everything is going in the right direction.

"We go to England now, we know we have a lot of fans out there who will come to the game.

"We don't stand a chance of going through, but we want to go to Wembley and at least allow our supporters a little fun."

England will be without midfielder Tom Cleverley (calf) and suspended defender Kyle Walker, but have called Liverpool midfielder Raheem Sterling into the squad as cover.

Defender Lukasz Szukala will not be available for Poland after a booking against Ukraine rules him out through suspension.