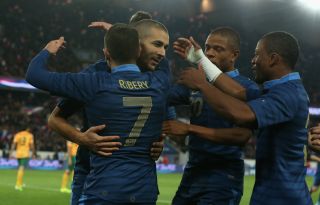 Didier Deschamps' men sit second in UEFA Group I, three points adrift of world and European champions Spain, and would need to beat Finland and hope that Georgia can inflict Spain's first defeat in World Cup qualification since March 1993 to reach the finals automatically.

But even that could still not be enough for France, who also require a four-goal swing in goal difference to ensure their place at next year's tournament in Brazil.

However, although Deschamps' side look destined to finish second in the group, France will be eager to gain momentum ahead of a prospective qualification play-off.

France hammered Australia 6-0 in a friendly on Friday and will be confident of clinching victory against a Finland side that they have yet to lose to in their history.

Striker Olivier Giroud approaches the game following a double against Australia, while Karim Benzema will be out to find the net again after ending a 16-month goal drought for his country in the same game.

However, Finland - who have already been eliminated from World Cup contention - should provide stern opposition at the Stade de France, having tasted defeat in just two of their last 11 outings in qualifiers and friendlies.

A goal from Roman Eremenko gave Mixu Paatelainen's men a 1-0 win against Georgia on Friday, but they will need to be more clinical in front of goal if they are to end their unsuccessful campaign on a high.

Finland have scored just five goals in qualification, with midfielder Kasper Hamalainen and striker Teemu Pukki - who have scored two goals each - accounting for the majority of those strikes.

Paatelainen's side have lost twice in qualifying despite their poor record in front of goal and gained an impressive result back in March when they held Spain to a 1-1 draw.

The visitors have conceded six goals in their seven qualifiers and will need to maintain their defensive strength if they are to end their wait for a win over a team that has scored 10 goals in their last two matches.