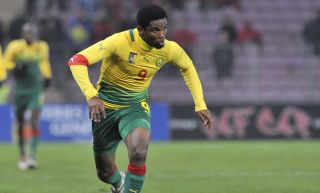 The four-time African Player of the Year hinted last month that he would no longer be available for the national team after the qualification group stages.

However, Chelsea striker Eto'o has now had a change of heart and is set to lead the Cameroon line in the first leg of the crucial tie in Rades on Sunday.

Cameroon have the better head-to-head record between the countries with six wins in the nine previous meetings, and Tunisia's only win came a decade ago in an international friendly in Tunis.

They have not met since January 2010, when they battled out a 2-2 draw during the group stages of the Africa Cup of Nations.

Tunisia were given a reprieve in qualifying after Cape Verde were docked three points for fielding an ineligible player during their clash.

This led to Ruud Krol's side being awarded the win, which saw them top Group B with 14 points.

Tunisia's last defeat in all competitions came in January when they were beaten by Ivory Coast in the African Cup of Nations - a result that ultimately saw them eliminated from the competition.

Cameroon saw off the threat of Libya in Group I and qualified for the play-offs with 13 points from their six matches.

They lost to Libya in June 2012, their only defeat in qualifying, but are now unbeaten in their last five matches in all competitions.

Manager Volker Finke will have to do without Stephane Mbia, Cedric Raoul Loe and Landry Nguemo due to injury, but he has called up Macky Franck Bagnack and Mohamadou Idrissou to help replace the injured trio.