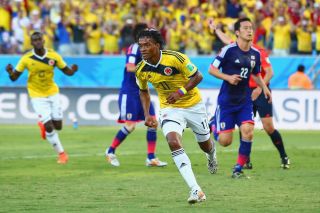 Colombia winger Cuadrado has been heavily linked with a move away from the Serie A club.

Barcelona and Manchester United are among the teams to have been credited with an interest in the 26-year-old, who scored once in five games for Colombia at this year's World Cup in Brazil.

Fiorentina are understandably keen to hold on to a player that netted 15 times for the Florence club last season.

However, Della Valle is pessimistic of keeping the former Udinese man at the Stadio Artemio Franchi.

"Should it happen that an important offer arrives, we would have to allow Cuadrado to leave," Della Valle said.

"So with that I am not so optimistic about a positive final situation as I think an offer will arrive in the next few days, but he will only leave for certain amounts.

"But you need to understand if an important offer does arrive, it is like a loose train and I can't hang on.

"I told the player and underlined things that there is a serious project here and he could remain for one more season, in a winning side.

"He is honest and serious with us, and I told him if an offer should arrive we would free him.

"But the deadline is about a week to ten days away - around August 15 and if there is no adequate period in this period, he will remain."