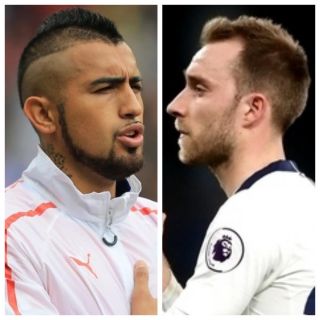 Manchester United have given up hope of landing Tottenham midfielder Christian Eriksen, reports the Evening Standard. The Dane is looking to leave Tottenham, but Ole Gunnar Solskjaer has accepted he will move abroad rather than to another Premier League side.

Meanwhile, United have been scuppered in their approach for Barcelona’s ArturoVidal, reports the Daily Mirror. The club were looking to bring in the Chilean midfielder but the LaLiga side have insisted the player is not for sale.

Sticking with Barcelona and Tottenham are interested in signing NelsonSemedo during the transfer window, the Daily Mirror says. The side are looking to bring in right-back as Kieran Trippier is out on loan at Atletico Madrid and Kyle Walker-Peters is expected to head to Crystal Palace.

Leicester and Manchester City are set to battle it out for the signature of MerihDemiral, according to the Mirror. The Foxes have had bids of £24.5million and £34m rejected by Juventus but the paper reports Brendan Rodgers’ side will make a fresh approach for the defender, while City and Everton may look to hijack the move.

Tottenham and Chelsea will both look to sign ThomasLemar on loan, reports the Daily Telegraph. The 24-year-old is currently at Atletico and both Premier League clubs may look to the Frenchman to bolster their attacks.

Gareth Bale: The Wales international could still be on his way out of the Bernabeu, with the Daily Telegraph reporting that Real Madrid are looking to sell the 30-year-old.

Yan Couto: Arsenal are interested in bringing in the 17-year-old from Brazilian side Coritiba, reports Globoesporte.

Ademola Lookman: RB Leipzig have put a £22.5m price tag on the England Under-21 forward amid interest from Newcastle, according to the Northern Echo.