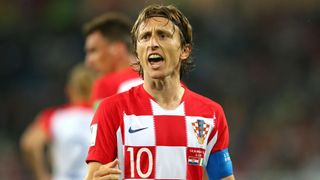 Croatia take on Denmark on Sunday, almost exactly 20 years after their finest moment in international football.

In the 1998 World Cup, the nation's first as an independent state, they met Germany in the quarter-final in Lyon. They had beaten Japan and Jamaica to finish second in their group to Argentina, before edging past Romania in the last 16 thanks to a Davor Suker penalty.

Their adventure was expected to come to an end against the reigning champions of Europe. Instead, it reached its pinnacle. Goals from Robert Jarni, Goran Vlaovic and the indomitable Suker sent Croatia to the last four with a 3-0 win. They went on to finish third, which remains their best performance at a major tournament, an achievement that has never been forgotten – specifically by critics of the teams to come.

Croatia went out of the groups in 2002, 2006 and 2014, drawing with Australia, losing to Ecuador and twice being beaten by Mexico and Brazil. But in 2018, just like in France 98, they are back in the knockouts, boast a favourable draw and have a 'golden generation' at its peak. They've also thrashed an historic footballing power 3-0, for good measure. If they are going to write a new best chapter in their relatively short footballing story, now is the time.

"We know the team from 1998 was great, they were all our idols and they showed the way for each Croatian team afterwards how to do it. But at this point we need to forget about them," Ivan Rakitic said on Friday.

3 - Croatia have won three consecutive World Cup games for the first time in their history. Outsiders.June 26, 2018

"God willing, we can achieve the same result, or maybe even more. I wouldn't say it's something that burdens us. We need to enjoy the tournament. We want to show the world how good this Croatian team is, how hard we fight for our country. Hopefully, in 20 years, they are talking about us in the same manner."

It might not be a burden, but it's becoming an expectation. And with good reason. This is a team with Rakitic, Luka Modric, Ivan Perisic and Mario Mandzukic, elite footballers with 358 caps between them and honours by the bucketload. They won all three group games, something they have never done before, and the only goal they conceded was a Gylfi Sigurdsson penalty.

The considerable shadow of the legal case involving powerbroker Zdravko Mamic, to which Modric and Dejan Lovren are linked and that has caused huge anger between supporters and the Croatian Football Federation, has been successfully ignored. Even Nikola Kalinic's return home, officially due to injury but alleged to have been partly down to indiscipline, has not derailed this redoubtable side.

In short, at a World Cup where none of the favourites are flying, Croatia are soaring. They meet a decent but beatable Denmark team in Nizhny Novgorod, the scene of their famous win over Argentina, and will face an unsteady Spain or a limited Russia if they progress.

In all probability, this will be the last World Cup for Modric, Rakitic, Mandzukic and Perisic, and perhaps Lovren, Milan Badelj and Danijel Subasic, too. If they are going to emulate their heroes of 1998, or even best them, the onus is on these players to embrace the challenge ahead.