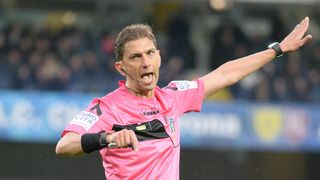 Tagliavento, who was born in Terni, retired from officiating in May after 14 years in Italy's top flight, during which time he spent a decade as a FIFA and UEFA referee.

He infamously disallowed a goal by Sulley Muntari in AC Milan's 1-1 draw with Juventus in February 2012 that proved to be a defining moment in the Scudetto race that year – a decision he described as his "most obvious mistake".

The 45-year old, who previously worked as a hairdresser, oversaw 28 Champions League matches and 32 in the Europa League, but will remain in football with his hometown club.

A statement on Ternana's official website said: "Ternana is pleased to announce the arrival into its senior management of Paolo Tagliavento.

"[He] has always been a profound connoisseur of Italian and European football.

"Tagliavento has immediately established a positive relationship with the club, especially with the president Stefano Ranucci, with whom mutual esteem and a sharing of views immediately emerged."

Ternana were relegated from Serie B in 2017-18 after finishing rock bottom with just seven wins from 42 league matches.