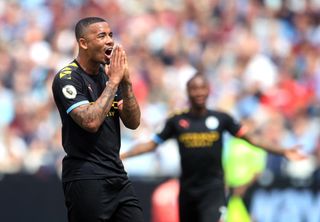 The second game of the 2019/20 Premier League season produced the division’s first VAR-overturned goal and prompted plenty of discussion.

Manchester City were 2-0 up against West Ham at the London Stadium and thought they had a third in the second half, only for Mike Dean to rule Gabriel Jesus’ goal out for an offside infringement by Raheem Sterling.

After consulting the VAR, referee Mike Dean has overturned the goal because of an offside in the build-up— Premier League (@premierleague) August 10, 2019

Later in the game West Ham were on the receiving end of VAR however when Sergio Aguero was ordered to retake his missed penalty after encroachment from West Ham’s Declan Rice – the Argentinian scored at the second time of asking.

PENALTY RETAKE The penalty will be retaken because of encroachment by West Ham which had an impact on the match#WHUMCI— Premier League (@premierleague) August 10, 2019

Much of the backlash against VAR in this game appeared to be prompted by the fact Sterling was offside by a matter of millimetres, leading some to question whether the laws of the game needed to be changed.

The technology had high-profile support however, with former Liverpool defender Jamie Carragher tweeting: “VAR will have problems at times this season, but to criticise it when it does its job is just nonsense.”

VAR gets two very tight offside decisions spot on. Re take of a penalty spot on because Rice encroaches & then clears the ball away. VAR will have problems at times this season, but to criticise it when it does its job is just nonsense.— Jamie Carragher (@Carra23) August 10, 2019

Former England forward Stan Collymore was irritated by some fan reaction meanwhile, tweeting: “Really don’t understand the fuss. Some spoilt fans moaning because their pub debate is more important than a correct decision?”

Match of the Day presenter Gary Lineker described himself as “pro VAR” on social media, and suggested that “some sort of in-ball technology to determine exact moment of contact” was required to make offside calls more accurate.

I’m pro VAR by the way. Always have been, but this ‘you’re either offside or you’re not’ argument will be fine once we have the technology to prove it…and it will come: guess it will need some sort of in-ball technology to determine exact moment of contact.— Gary Lineker (@GaryLineker) August 10, 2019

Former City striker Shaun Goater joked about the scoreline, tweeting: “Did @ManCity win 5-0 or we waiting on VAR?” while another former City player David Brightwell said: “It’s going to be a looooonnnngggg season watching this farce.”

It's going to be a looooonnnngggg season watching this farce— David Brightwell (@brighty1971) August 10, 2019

Major League Soccer became one of the first leagues to use a video review system in 2017. Former USA player Alexi Lalas jokingly tweeted: “Welcome to the #VAR party @premierleague.”

With the entire Premier League season to come, this will be far from the last time VAR steals the spotlight.