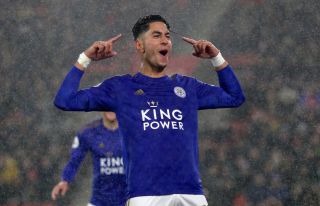 Ayoze Perez might not have set the world alight yet at Leicester, but his recent form suggests he could be worth investing in for the remainder of the season.

The Foxes attacking midfielder has gone through patches of goals and Fantasy Premier League points this season, but a five-week breakdown shows he is revving the engine once again.

In fact, as a percentage of his overall season total, no player is emerging quite like Perez…

Perez’s sudden rise in form can’t even be matched by the great Sergio Aguero, the Spaniard having scored 32.7 per cent of his overall points total between gameweeks 21 and 25.

After 12 goals for Newcastle last season, Perez started this term as the most selected midfielder priced under £7m.

Following his move to Leicester, there was talk that he might partner Jamie Vardy up front, rather than plying his trade out on the wing, and 18 per cent of managers gambled that they might happen upon a bargain.

Eight points in the Foxes’ first five matches sent most of them running for the hills and, by the time Perez posted an epic 20 points in the 9-0 victory over Southampton, his fan base stood at just 3 per cent.

Adding a goal against Brighton to the three against the Saints, the Spaniard saw his ownership double before six points in as many weeks caused it to plummet again.

After being bitten twice, most managers stayed away after his consecutive double-digit returns in gameweeks 20 and 21, but two more goals and 15 points against West Ham saw his ownership rise to its highest point since the third week of the season.

Perez may have achieved his total in an unconventional way, but his 104 points makes him one of the top 10 scoring midfielders so far, and no player in his position who costs less has scored more.

Perhaps a lesson that FPL managers should learn to take the rough with the smooth.

Second on the scoreboard after the first five matches was Aguero with 46 points, following that up with a comparatively weak 36 in Manchester City’s next 15 matches.

The Argentinian missed five of those games through injury, but still achieved a worse return in twice as many appearances.

Since being rested against Everton on New Year’s day, Aguero has racked up six goals and an assist in just 263 minutes of football, for a total of 39 fantasy points.

This makes him one of just three FPL centurions to have scored more than 30 per cent of his season’s total in the last five matches.

With half as many owners as his teammate Kevin De Bruyne, another scoring spree from Aguero could prove the difference in your mini league.