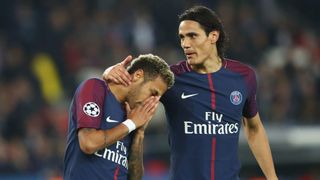 Neymar and Edinson Cavani appeared to have settled their dispute over penalty-taking duties during Paris Saint-Germain's Ligue 1 meeting with Bordeaux.

The duo were involved in an on-pitch disagreement during the match against Lyon a fortnight ago with both players wanting the responsibility from the spot, leading to reports of a rift.

Cavani won out on that occasion but failed to convert, and head coach Unai Emery later assured he would rotate the penalty taker in order to avoid the situation occurring again.

It was Neymar who stepped up against Bordeaux and slotted into the bottom-left corner, and he celebrated by hugging Cavani, suggesting all is well in Paris.